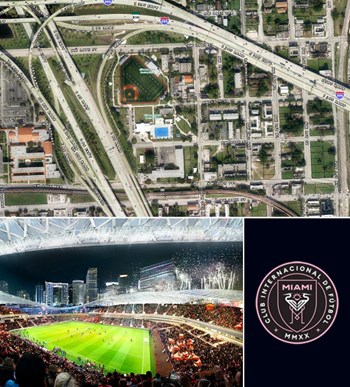 Soccer Star David Beckham is still on the hunt for a location for his potential soccer stadium in Miami, and has come across some land in Overtown.

Beckham and his group have reportedly been looking at property that is just west of All Aboard Florida’s railroad tracks. It is believed to be a patch of land between 11th and 13th Street, and between Northwest First Avenue and Northwest Second Avenue. The validity of this report is questionable, but it does seem plausible.

If this plan is real and Beckham wants his soccer stadium in Overtown, it would require the destruction of some apartment buildings and possibly cause streets to close temporarily.

Beckham has mentioned before that he wants the stadium in the urban core of Miami. Overtown would allow for the stadium to be located near public transportation, as well as be close to some of the new condo projects in Miami. The Miami Worldcenter and All Aboard Florida’s terminal would be nearby as well.

It is also believed that Beckham and his group are searching for land in other locations in Dade County.