MIA is Open! These Direct Flights to Miami You Can Book Now

Whether you live in Miami or are visiting, you can count on passing through Miami International Airport (MIA) at some point. Located near Downtown Miami, MIA is America’s third-busiest airport for international passengers. Miami International Airport also acts as a crucial link between the US, Latin America, South American and Europe. It particularly serves as an important gateway to Latin America and the Caribbean, with more flights to the region than any other airport in the United States.

Offering some of the best connectivity in the world, the Miami International Airport operates at least 75 non-stop flights to international cities and 61 direct flights to domestic destinations with more planned (statistics as of February 2021). There are over 100 airline carriers that fly in and out of MIA every day, making it the perfect hub for passengers and cargo alike. You can catch a direct flight to cities in Spain, Qatar, Turkey, Switzerland, Israel, Cuba, Puerto Rico, Panama, Colombia, Brazil, Argentina, Chile, Peru, and more from this international aviation hub.

Considering Miami’s ever-increasing position as not only a top tourist destination, but more recently as an important international tech and business hub, MIA continues to add new carriers, cities, and nonstop flights to its availability. Additionally, American Airlines’ hub is in Miami. By the end of 2021, American Airlines will offer more than 130 direct destinations out of Miami, more than any other airline. 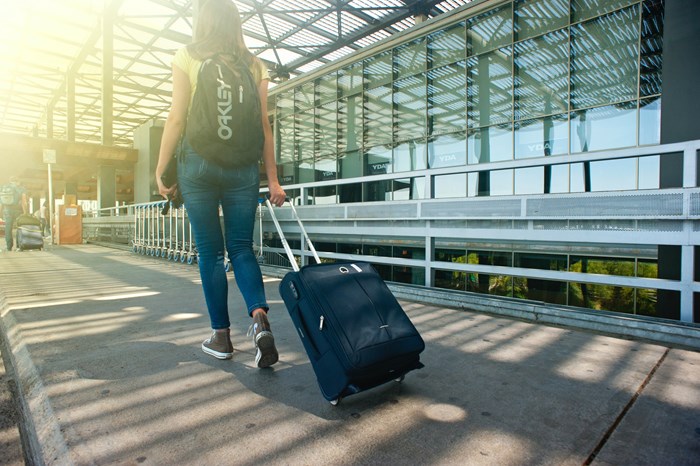 Photo by Alexandr Podvalny from Pexels

Direct International Flights to and from Miami (MIA)

Europe - Flights to and from Miami

Now that Europe has opened its borders to international travel and tourists, many airlines have begun nonstop service again. Direct flights between Europe and Miami are available on several airlines, some offering flights multiple times a week.

Middle East - Flights to and from Miami 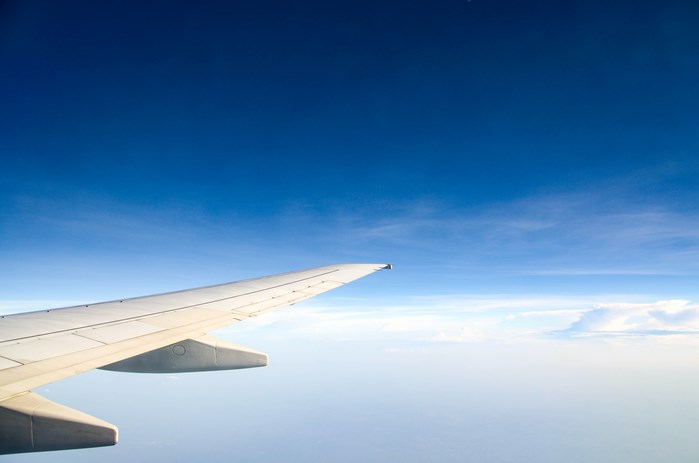 MIA offers more flights to Latin America, South America and the Carribean than any other airport in the country.

Central America - Flights to and from Miami

South America - Flights to and from Miami

Caribbean & Bahamas - Flights to and from Miami

Mexico - Flights to and from Miami 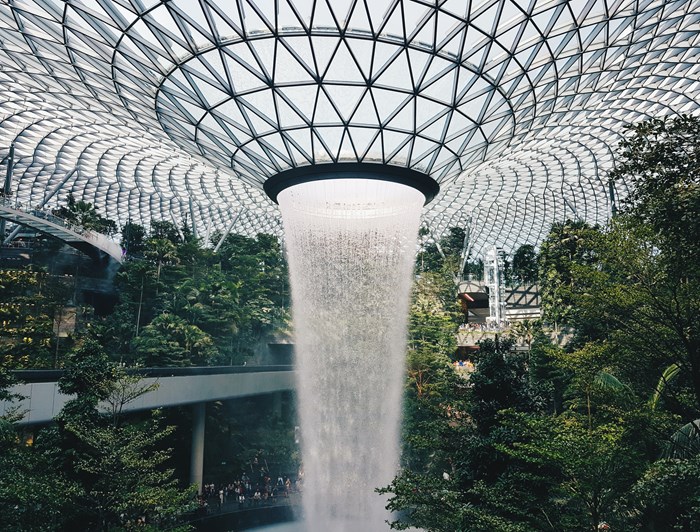 Getting to and from MIA is also important to your travel plans. Here’s a quick look at your options for travel to and from the airport when in Miami and the Miami Beaches:

For more details on your transit options, schedules, and access to the Miami International Airport, go here.

Love the connectivity offered by a home in Miami? Call, chat, email to have a local real estate expert pair you with your perfect residence or investment condo. 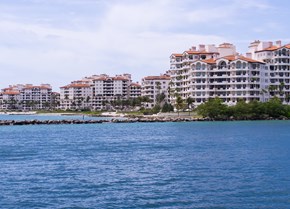 The Best Miami Neighborhoods: Key Biscayne vs Fisher Island
New Emotional Support Animal Law Florida 2020 - What it Means for Landlords and Condo Residents with an ESA Dog or Cat

Real Estate News Greater Downtown Miami Luxury Condo Market Report Q2 2021 - Brickell Leads Miami Growth
View the most up-to-date market reports. Take me there now! The explosive sales trend for Miami condo sales seen during the first quarter of 2021 has only grown in the second quarter of the year. Our Q2 2021 luxury condo market report for Greater Downtown Miami highlights unprecedented triple-digit growth over the previous quarter, and two sub-markets in this grouping reported incredible four-digit growth, while all three neighborhoods - Downtown Miami, Edgewater, and Brickell - all posted record-high sales. In Q2, Brickell leads Miami's growth story, reporting the highest percentage increase in year-over-year sales of all neighborhoods under review in our Q2 2021 Overall Miami Condo Sales report. And, even though all 3 sub-markets report the highest levels of inventory in all of Miami and Miami Beach, they are at a record-low in the 5 years of our reporting. The overall Miami market has already transitioned into a seller's market, and only this Greater Downtown Miami grouping is...
by Sep Niakan

Market Reports Miami Overall Luxury Condo Report - Q2 2021
View the most up-to-date market reports. Take me there now! The second quarter of 2021 marks the third consecutive quarter of booming sales for Miami's luxury condo market. Powered by businesses and people continuing to move to South Florida (first sparked by Icahn Enterprises in 2020), luxury condo sales in Miami have shown unprecedented growth. There have been more sales in the first half of 2021 than in all of 2020 or 2019 (1229 sales versus 715 and 718 sales, respectively). Backed by exceptional momentum - to the tune of a record-breaking 754 sales in this last quarter - the luxury condo market has officially made it out of its long-standing buyer-friendly position. Miami's luxury condo market has now corrected to a seller's market, with inventory at 9 months, its lowest-ever in over 6 years of our reporting.With so much demand, and sellers regaining control, prices are also steadily increasing.  Looking at specific neighborhoods, Fisher Island holds as the most expensive...
by Sep Niakan
Real Estate News Five Park Condos: Pre-sales for South Beach’s Newest and Tallest Tower
Envisioned to stand as an iconic beacon at the entrance to South Beach, sales are now underway for the Five Park condo residences. Previously known as Canopy Park or the Park on Fifth, the 519-foot tower is an ambitious project by developers David Martin (Terra Group) and Russell Galbut (GFO Investments) set to give Miami Beach its tallest tower yet.  The 48-story cylindrical tower designed by Arquitectonica will house 98 luxury residences anchored by a dog-friendly 3-acre public park complete with native shade trees, art displays, a Monstrum playground, and more. Tasteful retail and an artistic bridge over 5th Street - connecting the community to a baywalk, the marina, and South Pointe Park in South of Fifth - are other highlights at this iconic development. The entire development will be optimized for sustainability with resourceful water management and heat load management. Five Park - The Tallest Building in Miami Beach Towering 519 feet above the gateway to Miami Beach,...
by Stephanie E. Bienstock

Real Estate News District 225: Related Group’s Latest Miami Condo Project Will Allow Airbnb, Short-Term Rentals
In a nod to current market demand for luxury condo projects that double up as smart investments, the Related Group launched sales last month for District 225 – a turnkey, Airbnb-ready condo project. The 37-story condo tower will feature 347 condo residences built to live and host freely, allowing short-term rentals. The announcement comes shortly after the success of other pre-construction condo projects in Miami such as Legacy Hotel & Residences and E11even Hotel and Residences that are completely sold out before breaking ground. While these projects do allow short-term rentals via their hotel component or building’s rental management services, Related’s District 225 stands out for coming with a built-in partnership with Airbnb. What it means is that owners will be able to rent seamlessly on the world’s most popular home-sharing websites, gaining maximum exposure and control over their investment and over how often they would like to rent out. Airbnb’s Influence on Downtown...
by Sep Niakan
Preconstruction Miami’s New and Pre-Construction Condo Update: June 2021
Miami is in another strong real estate cycle and with the surge in demand we’ve seen in the first half of the year, condo developers are getting more and more projects off the ground or completed, with new announcements, sales launches, and adding second or third phases to their ongoing developments. To note, Downtown Miami’s E11even Hotel and Residences are already 100% sold out, even before shovels could hit the ground, and a second tower could be in development. Four new condo development projects were announced: Melo Group’s Aria Reserve, Related Group’s District 225, Aria Development’s 501 First Residences, and Russell Galbut plus David Martin’s Five Park – and all launched sales this June. And, foundation work is in full swing at Miami Beach’s Five Park and Brickell’s Baccarat Residences. Downtown Miami’s Natiivo has had its first cranes installed. And many other developments are taking place around town. Read on for details on these and more project updates in our Miami...
by Sep Niakan
Neighborhood Comparisons The Best Miami Neighborhoods: South of Fifth vs Fisher Island
Miami has many amazing neighborhoods to live in or move to. If you’re looking for an exclusive, luxury waterfront neighborhood in Miami, two that you may be considering are the South of Fifth (SoFi) area in South Beach, or well-known Fisher Island. The two neighborhoods share some similarities, and both are affluent communities known for their elegant beachside lifestyle, but there are many essential differences between the two that make for very different living experiences.   Our comparison of these two Miami neighborhoods gives you an insider's look at several characteristics that can help you decide which of the two you’d feel most at home living in. Lifestyle: South of Fifth vs Fisher Island Founded in the early 1900’s, the area of Miami Beach known as South Beach is one of Miami’s most picturesque neighborhoods, known for its distinct Art Deco architecture and sandy beaches. The area of South Beach located south of Fifth Street is the southernmost tip of the island of Miami...
by CondoBlackBook Team
Email this Page