The $2.7 Billion Miami Worldcenter is Progressing Rapidly. Downtown Miami Will Never Be the Same

Construction is proceeding rapidly at Miami Worldcenter, the $2.7 billion mixed-use megaproject that will finally fill the blighted gap between downtown Miami and the Omni area directly to the north. Spearheaded and master planned by developers Nitin Motwani and Art Falcone, various elements of Miami Worldcenter are being built either by them or other developers, and the first part of the massive development will be completed before the end of the year. 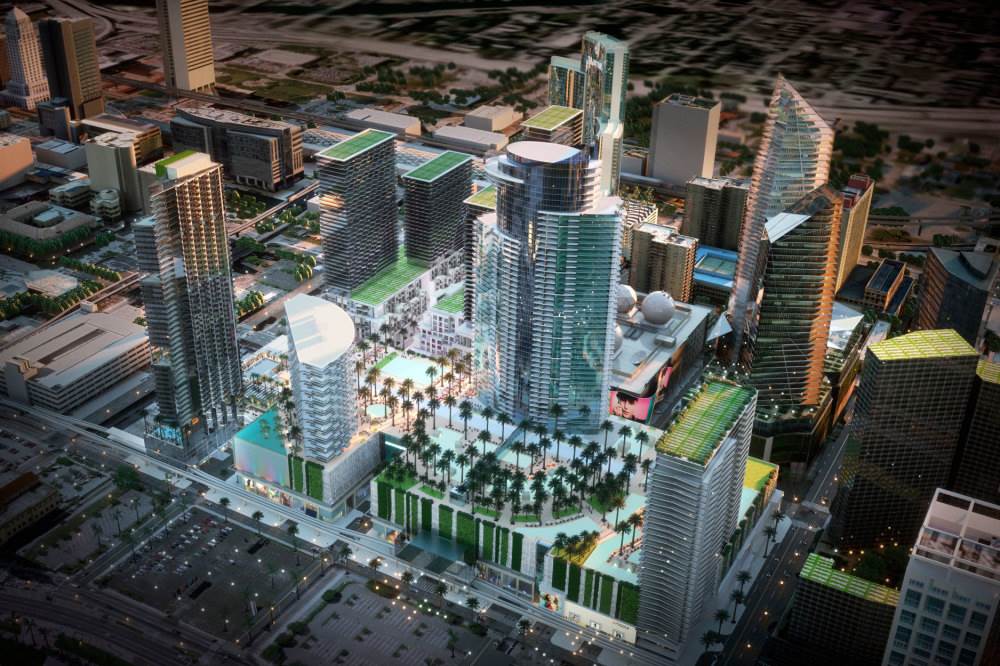 The 27 acre project will include multiple residential towers, at least one office building, hotels, retail, and pedestrian-oriented public spaces. Approximately 140,000 square feet of retail is currently under construction at Miami Worldcenter, predominantly in the parking decks of the Caoba apartment building and Paramount Miami Worldcenter, a luxury condominium tower above an outdoor shopping mall. An additional 160,000 square feet of retail is planned at the project.

Beyond Worldcenter, the entire neighborhood is booming with new construction, as it quickly becomes the latest extension of Downtown Miami. Other notable projects nearby, including the Brightline’s MiamiCentral station, and starchitect Zaha Hadid’s One Thousand Museum, are making it a neighborhood to watch. 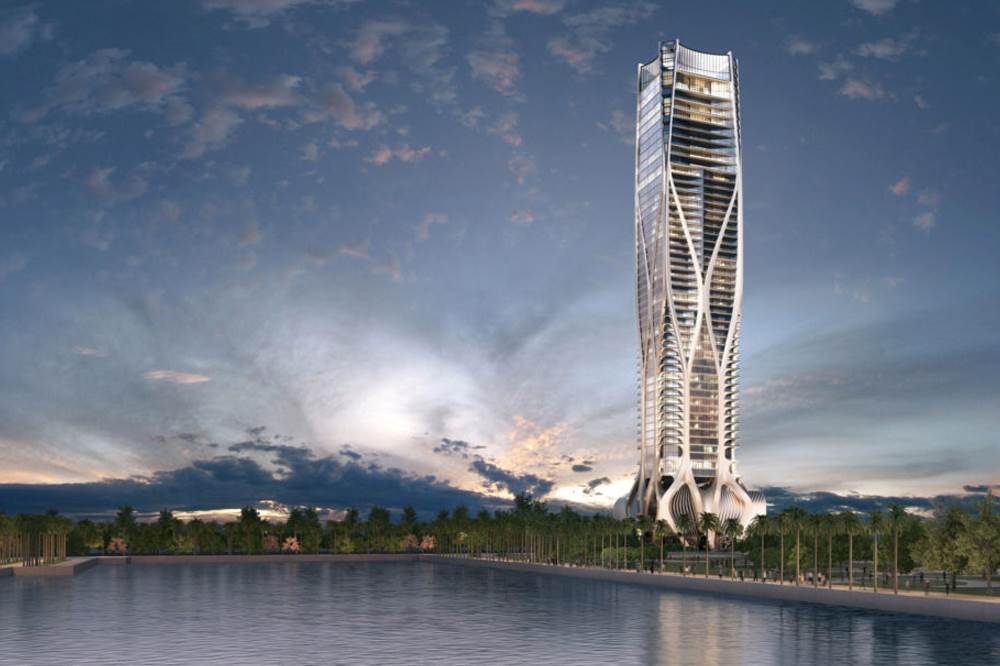 Most recently, a Citizen M Hotel was announced. It will be a 348-room, 12-story hotel along NE Second Avenue between Seventh and Eighth Streets. The hotel will be along Worldcenter’s pedestrian open-air shopping promenade. Gensler is the architect of the 128,000-square-foot building which will include nearly 2,000 square feet of co-working/creative meeting spaces. This will be the third Citizen M hotel in Miami-Dade, and the groundbreaking date has not yet been announced. 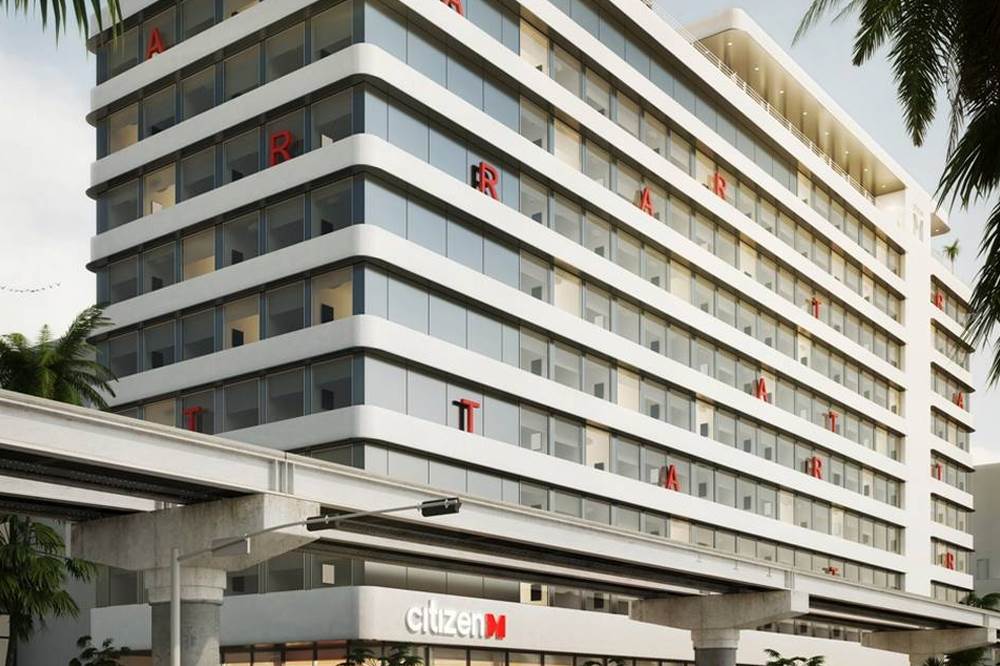 Meanwhile, Worldcenter’s flagship development, Paramount Miami Worldcenter just topped off. This luxury condominium tower is 700 feet tall, with 60 stories, and 569 luxury units. The project is noteworthy for its extensive amenities list, including an outdoor soccer field, two tennis courts, a boxing studio, golf simulator, indoor basketball court, rooftop observatory, game room, and 26 for-sale poolside cabanas, among many other features. One of the latest amenities to be announced is a 5,000 square foot residential ‘skyport’ for flying cars. It will sit atop a pedestrian shopping mall. Paramount is being built atop an outdoor pedestrian shopping mall which will be the retail heart of the project. 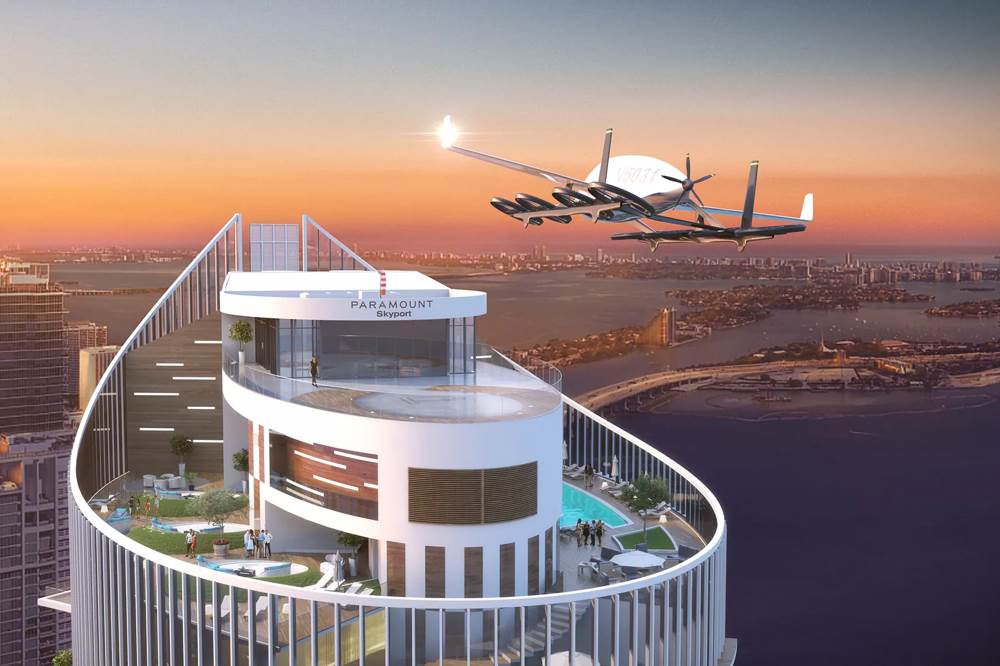 Meanwhile, MDM Group’s massive Marriott Marquis Miami Worldcenter hotel and convention center, adjacent to the Brightline station on the western edge Worldcenter, is breaking ground before the end of the year. It will have 1,700 hotel rooms, 500,000 square feet of meeting and exhibition space, and another 350-room boutique hotel.

The first part of Miami Worldcenter to be completed will be a rental apartment building, the Caoba Apartments. The 444-unit project, developed by CIM Group and the Falcone Group topped off earlier this year, and should be completed before the end of the year. “Miami Worldcenter’s master plan has been in the making for more than a decade, and we’re only months away from our first tower opening its doors,” Nitin Motwani told the SFBJ earlier this year. “From this point forward, we’re going to see a steady stream of project elements delivering to market – residential, retail, office and hotel – as our vision for a ‘city within a city’ in Downtown Miami becomes reality.”

Hines, another developer, is planning to break ground on a more than 500,000-square-foot office building at Miami Worldcenter in 2019, which will be the largest office building developed in Miami since 2010. It’s also downtown Miami’s first new office tower in six years and will cater to increasing demand for office space in the urban core. In May, the Miami Herald announced construction would begin by the second quarter of this year. 45 stories tall, it will be located at 110 NE 10th St. 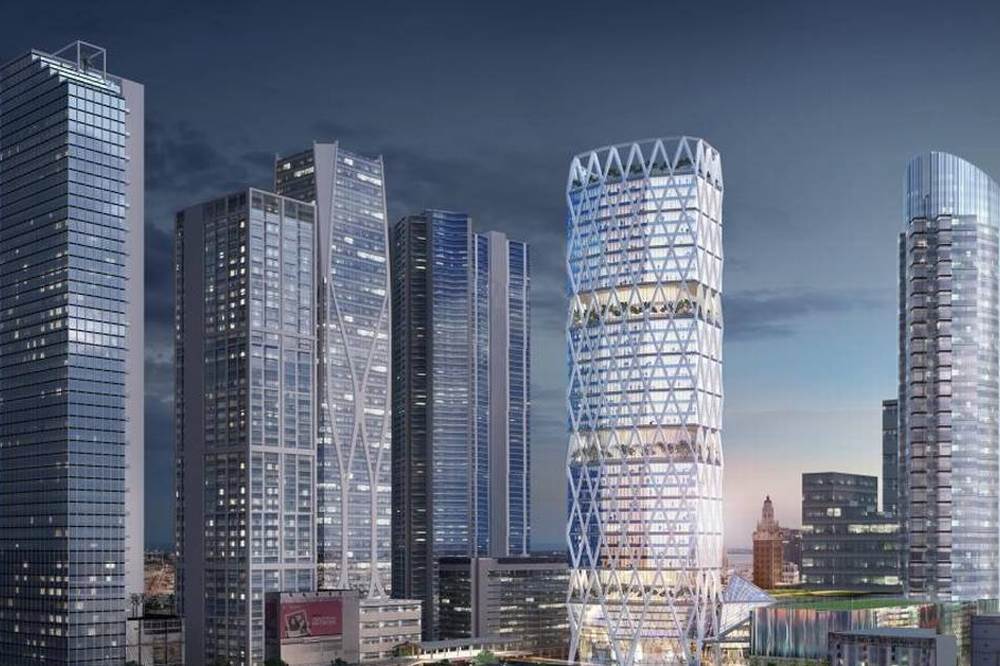 The diamond-patterned facade, known as a diagrid structure, looks faintly like the Hearst Tower in New York. The architecture firm of Pickard Chilton Associates, from New Haven, Connecticut, won a competition to design the building. It will feature a gym, common work spaces, and even a separate elevator for employees to bring their pets to work.

Real Estate News Introducing 501 First: Downtown Miami’s Latest Short-Term Rental Investment Opportunity
Miami is in the height of another renaissance, with more than 12 new condo building projects announced in the first six months of 2021 alone. One of these latest Miami new construction condo developments is 501 First in the heart of Downtown Miami.  Why do we think you should know about 501 First? If you love luxury real estate in a bustling metropolis, then the upcoming 501 First condo development will be worth your attention, especially if you are looking for condo investment opportunities. Miami is one of the world’s most popular destinations, as well as an international travel hub. Condo and real estate investments that allow short-term rentals and Airbnb rentals are extremely popular in a city like Miami.  We have written a lot about Miami condos that allow short-term rentals, and 501 First is one of the latest opportunities, having just launched. In fact, the 40-story tower will have no rental restrictions, allowing for short-term rentals, daily rentals, etc., making it a...
by Sep Niakan
Real Estate News Coconut Grove Development ‘Markers Grove Isle’ Rebrands as ‘Vita’
Luxury condo development project Markers Grove Isle rebranded as Vita Residences this June, after lengthy legal issues. The rebrand is a signal the Coconut Grove condo project is moving ahead after years of being stalled, making it one of the most eagerly awaited new Miami condo development projects, and a long-awaited addition to an island where nothing has been built in several decades. Sitting on the 21-acre, private island, Vita represents boutique, luxury waterfront living on Coconut Grove’s Grove Isle – forward-thinking and unlike anything built before it. Developed by Grove Isle Associates, construction on this island property is expected to begin by early 2022. Vita Grove Isle Residences If you know anything about Grove Isle, you may be curious about the design of this mid-rise project and how it will blend with the other three towers on the island. The collection of 5-story buildings will be set hugging the island’s serene eastern shoreline in modern, curvilinear...
by Sep Niakan

Real Estate News The Best Miami Neighborhoods: Key Biscayne vs Fisher Island
Two of Miami’s most private and exclusive neighborhoods are Key Biscayne and Fisher Island. These neighborhoods share a number of similarities, as both are affluent island communities separated from the mainland Miami Metro area. And each island is designed as a private enclave for Miami’s elite. But the two also differ in many ways, due to their locations, local lifestyle, and the communities that inhabit each location.   We’ve broken down details to compare Key Biscayne versus Fisher Island based on factors that can help you choose which of the two would be most suitable for you. Take a look. And don’t miss our other Miami neighborhood comparisons at the bottom of this article.  Lifestyle: Key Biscayne vs Fisher Island Key Biscayne is a comfortable residential neighborhood located on a small island that is connected to Mainland Miami by the Rickenbacker Causeway. Once you cross the causeway into Key Biscayne, you definitely feel the tranquility of being surrounded by water, and...
by Stephanie E. Bienstock
Real Estate News Miami Building Boom 2021: These are the 12 New Condo Development Projects Planned to Date
It’s a trend we’ve been talking about since the last quarter of 2020 - waves of buyers are contributing to one of the biggest real estate booms in Miami history. As individuals and businesses escape high tax states like New York and California, and have the freedom to work from any location, luxury condo developers in Miami are announcing new project after new project.   Miami condo developers have announced over a dozen new and relaunched condo projects since the beginning of 2021. In an attempt to appeal to a wide range of new residents, each new project aims to be taller, more luxurious, and offer the most exciting set of amenities imaginable, and could bring more than 10,000 residential units to Miami over the next few years. With the real estate market in Miami in one of its most lucrative cycles yet, here’s a look at the latest condo projects proposed in Miami since January 2021 (till the time of this post): New Miami Condo Development Projects 2021 E11even Hotel and...
by Sep Niakan

Real Estate News Miami Condos with Shabbat Elevators
Last updated June 11, 2021. Whether you refer to it as the Sabbath, Shabbat, Shabbos, or by any other term, your religious commitment to observing a holy day of rest should not prevent you from enjoying a luxury condo lifestyle in the subtropical paradise that is Miami.  For this reason, a number of condo communities provide the convenience of a Shabbat or Sabbath elevator, which is a specially programmed elevator that stops automatically on every floor during the Jewish Sabbath, from sundown on Friday evening until sundown on Saturday of every week.  This service is provided in order to accommodate the Jewish religious law that prohibits religious observers from pushing buttons or operating machinery during the Sabbath. While Miami today is known as a particularly Jewish-friendly metropolis, Jews were not even allowed to enter Miami Beach Hotels until the late 1940s. But by the 1950s they began to lay down roots in Miami Beach and to impact the economy, politics, and social flavor...
by Sep Niakan
Email this Page