The Latest Buildings Going Up, Topping Off, and Nearing Completion in Edgewater

Edgewater, the large neighborhood lining Biscayne Bay immediately north of Miami’s urban core, is still booming. Seven residential condominium towers are either under construction or in closings, with multiple rental apartment buildings under construction as well, and a plethora of other buildings have opened within the last ten or so years. The neighborhood is growing exponentially, and public amenities like a bay walk are gradually following. Here’s the latest Edgewater construction update. 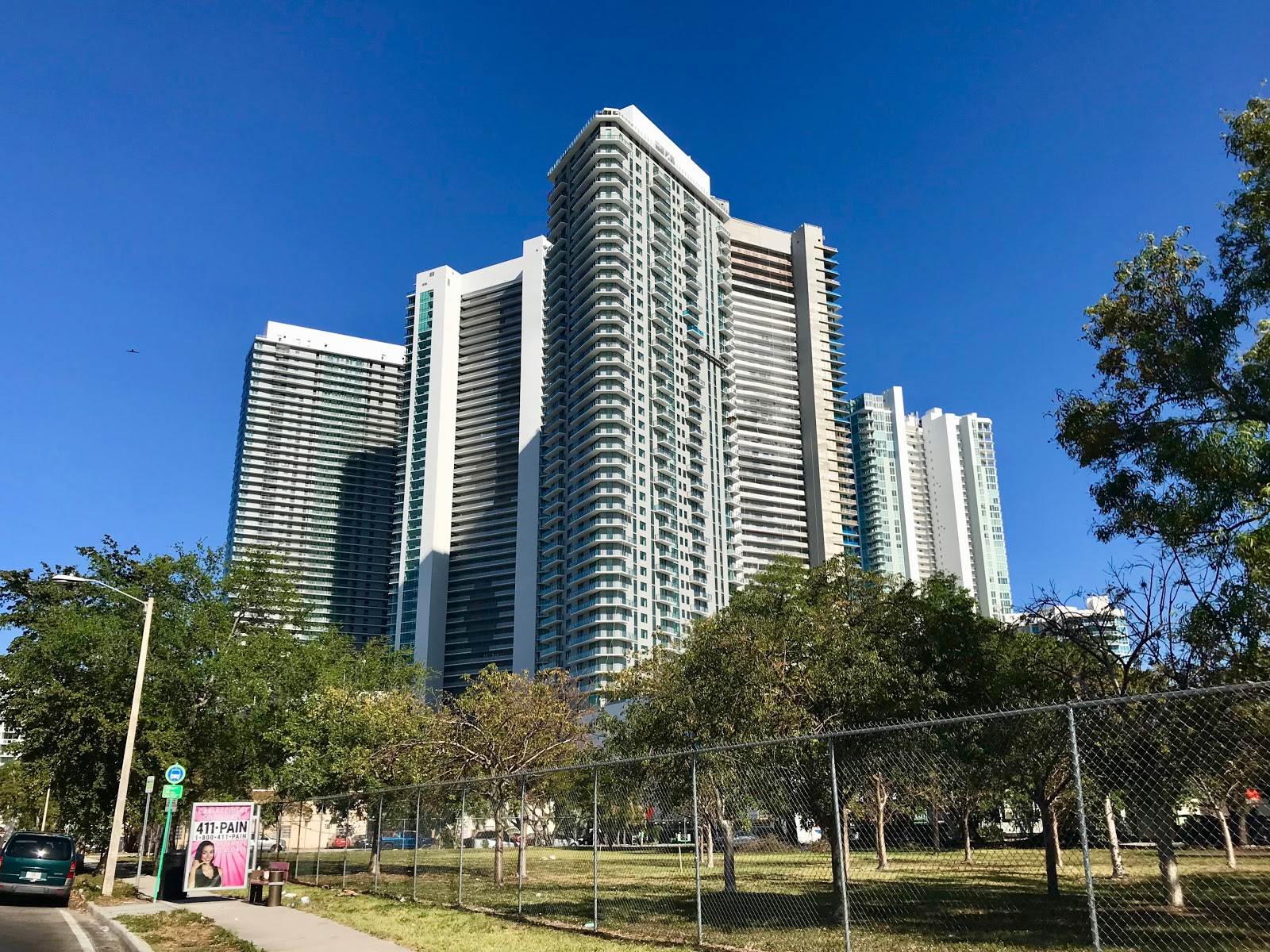 The massive Paraiso District, spanning two and a half city blocks from 32nd Street to 30th Terrace, is nearing completion. The four-tower megaproject is being developed by the Related Group. The towers are Paraiso Bay, Gran Paraiso, Paraiso Bayviews, and One Paraiso, which Related marketed at various price points. One Paraiso is the most high end, with Gran Paraiso and Paraiso Bay somewhere in the middle, and Paraiso Bayviews being the more affordable. Additionally, the project includes eight townhouses, the Paraiso ‘Beach Club,’ a bay walk, and a public park. Each tower is approximately 50 stories, and the entire project was designed by Arquitectonica. 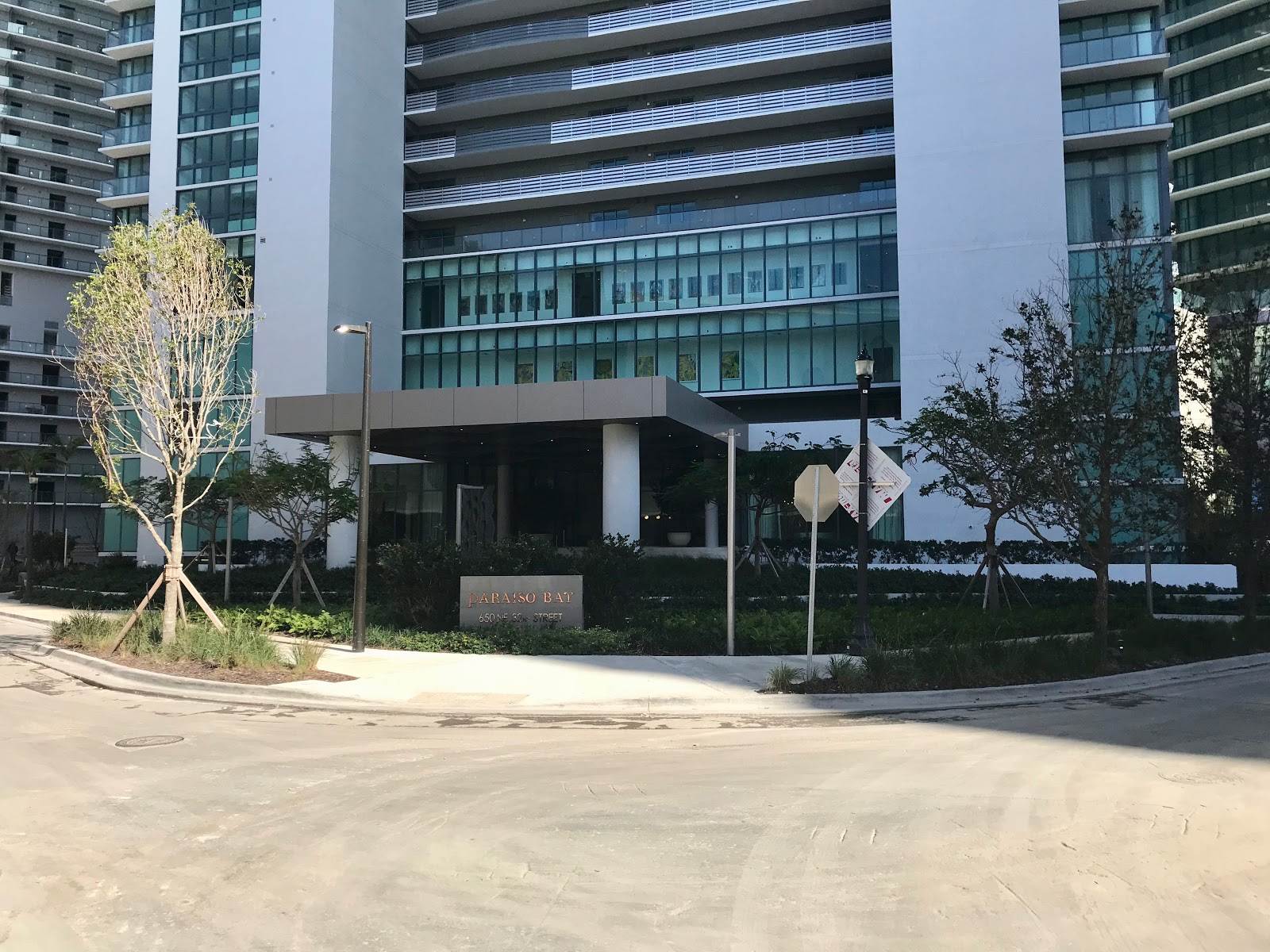 The first announced project of the Paraiso District Paraiso Bay has been completed and is doing its closings now. The building is sold out. It shares a large circular pool with Gran Paraiso.

A mirror of Paraiso Bay, Gran Paraiso is still under construction but also relatively close to completion. Fewer than 30 units remain for sale. With private elevators and single loaded corridors, like Paraiso Bay, practically all units have bay views.

As of March 20th, only one of the eight townhouses collectively known as Paraiso Bay Homes remained for sale. They are in the finishing stages of construction. Part of the pedestal of Paraiso Bay and Gran Paraiso, these line the parking garage, shielding it from the exterior, and provide indirect bay views. 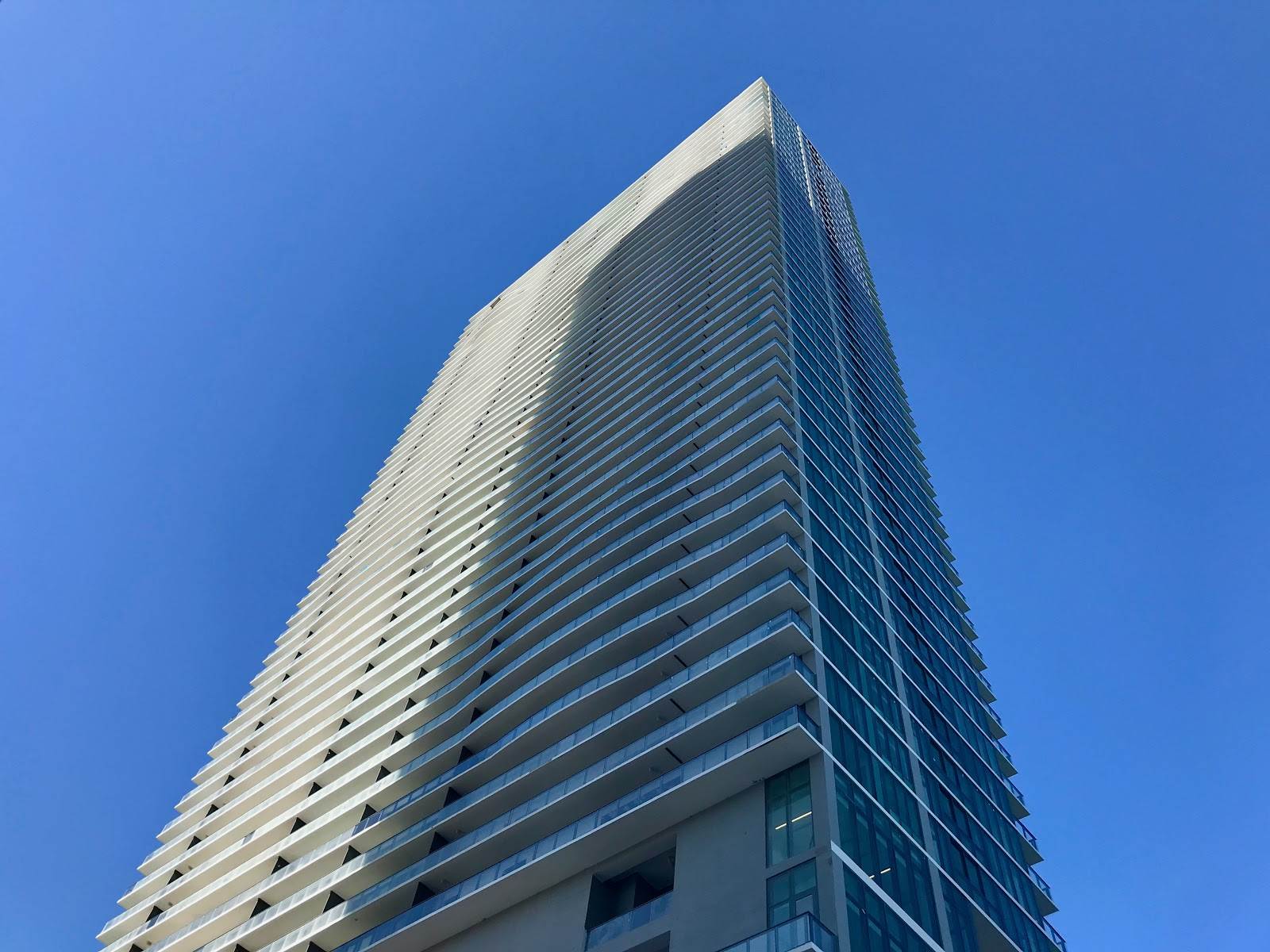 One Paraiso is entirely sold out. Still under construction, the project is relatively close to completion. Construction work on public interior and exterior spaces on the lower floors is highly visible. 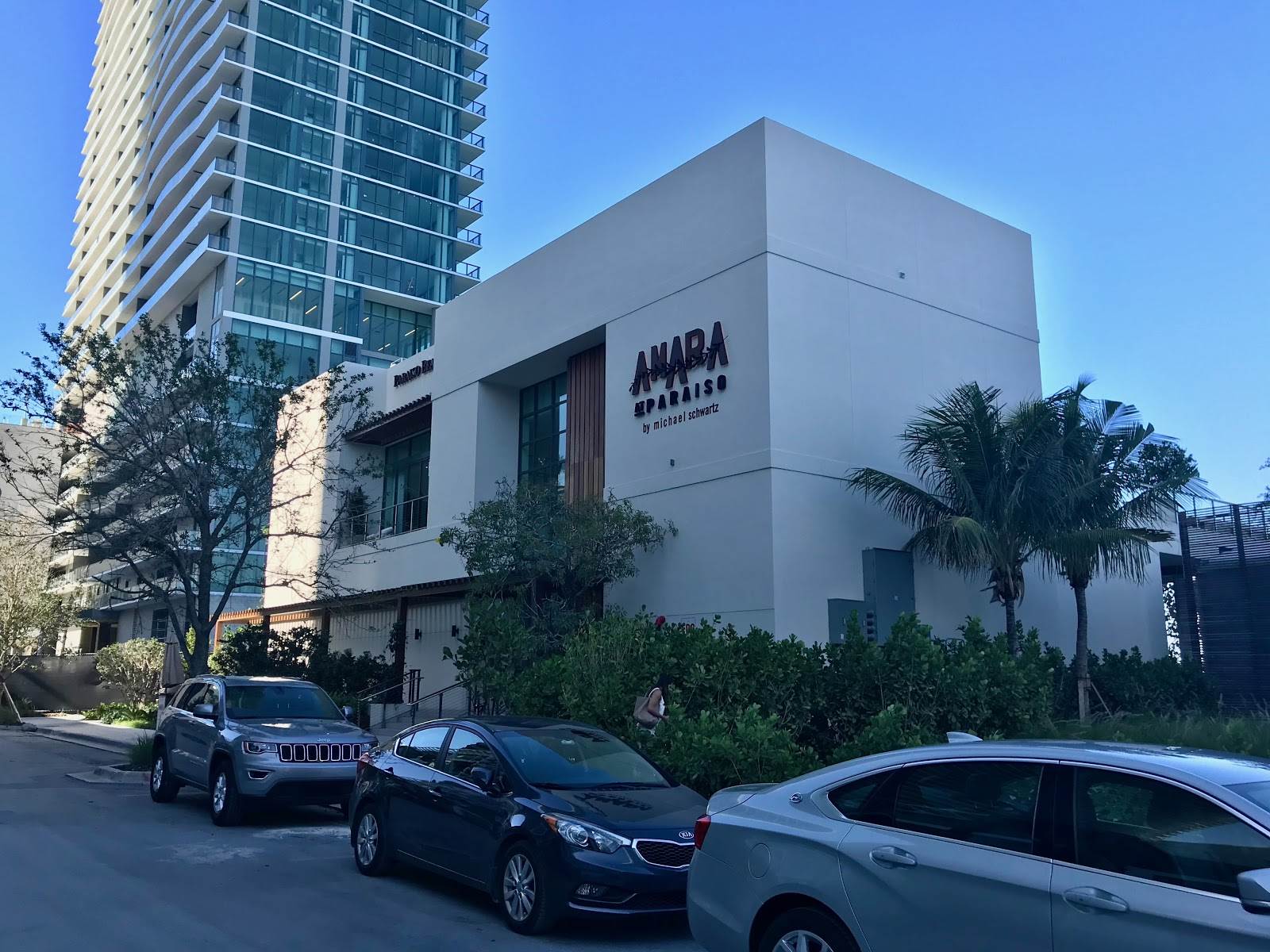 The biggest amenity of the gigantic Paraiso complex, the Beach Club was recently completed. It has a restaurant by celebrity chef Michael Schwartz as well as a private club area for Paraiso residents, in addition to the amenities of their individual towers. 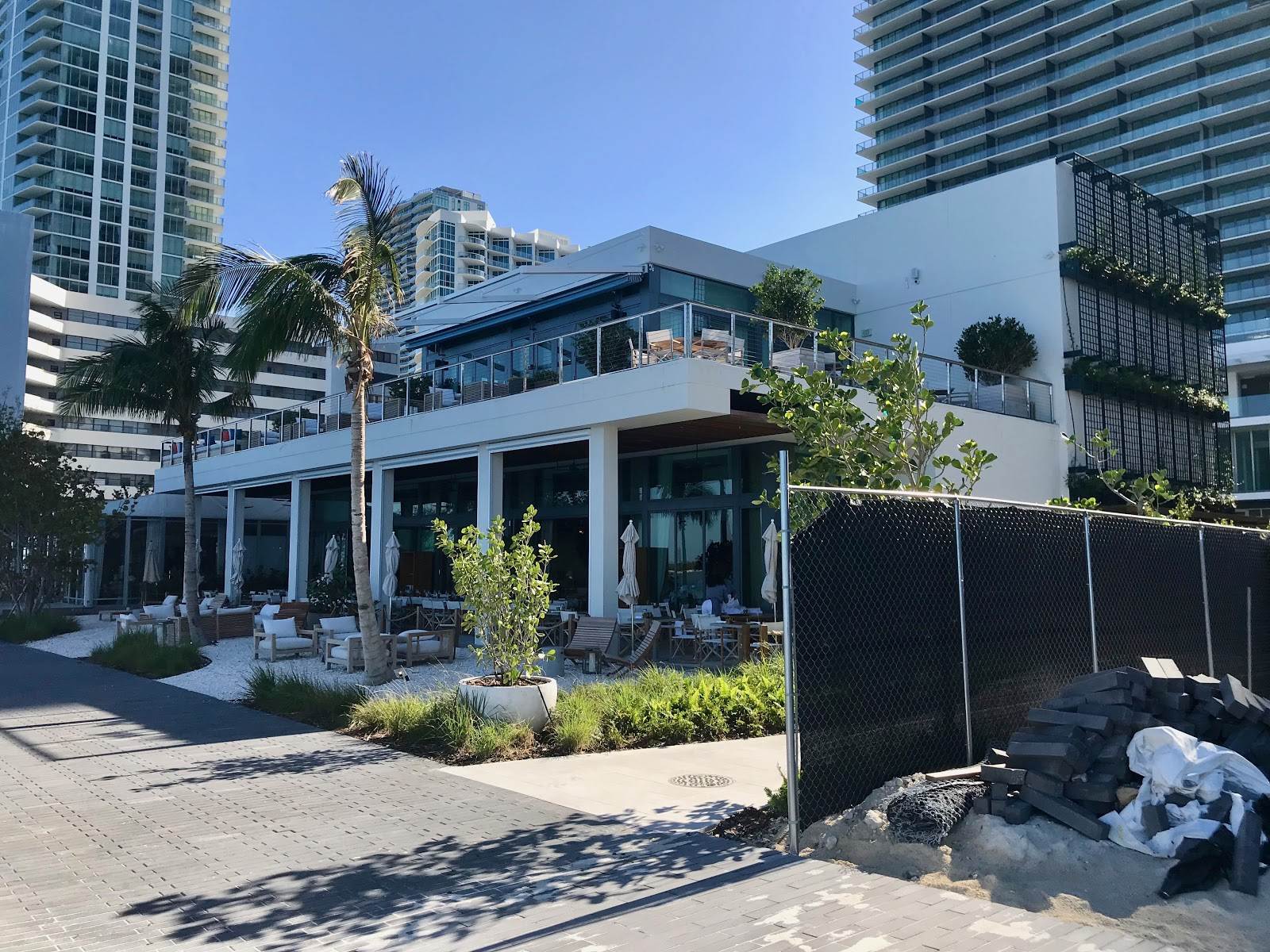 The bay walk that lines Paraiso along Biscayne Bay is finished and open, except for the section that will pass through the new public park. The sales center still occupies the site of the future park.

Nearing completion, the interiors of Paraiso Bayviews were designed by internally known designer Karim Rashid. Ironically, this is the building with the fewest bay views of the entire project. It is still in close proximity to the water, however, and some units have spectacular vantage points of the water through the gap between Paraiso Bay and Gran Paraiso.

The Rashid interiors are now being built out, and Related Group condo division president Carlos Rosso told us the building should be completed in mid-June. Paraiso Bayviews has 345 units, 13 of which were still on the market as of March 20th. 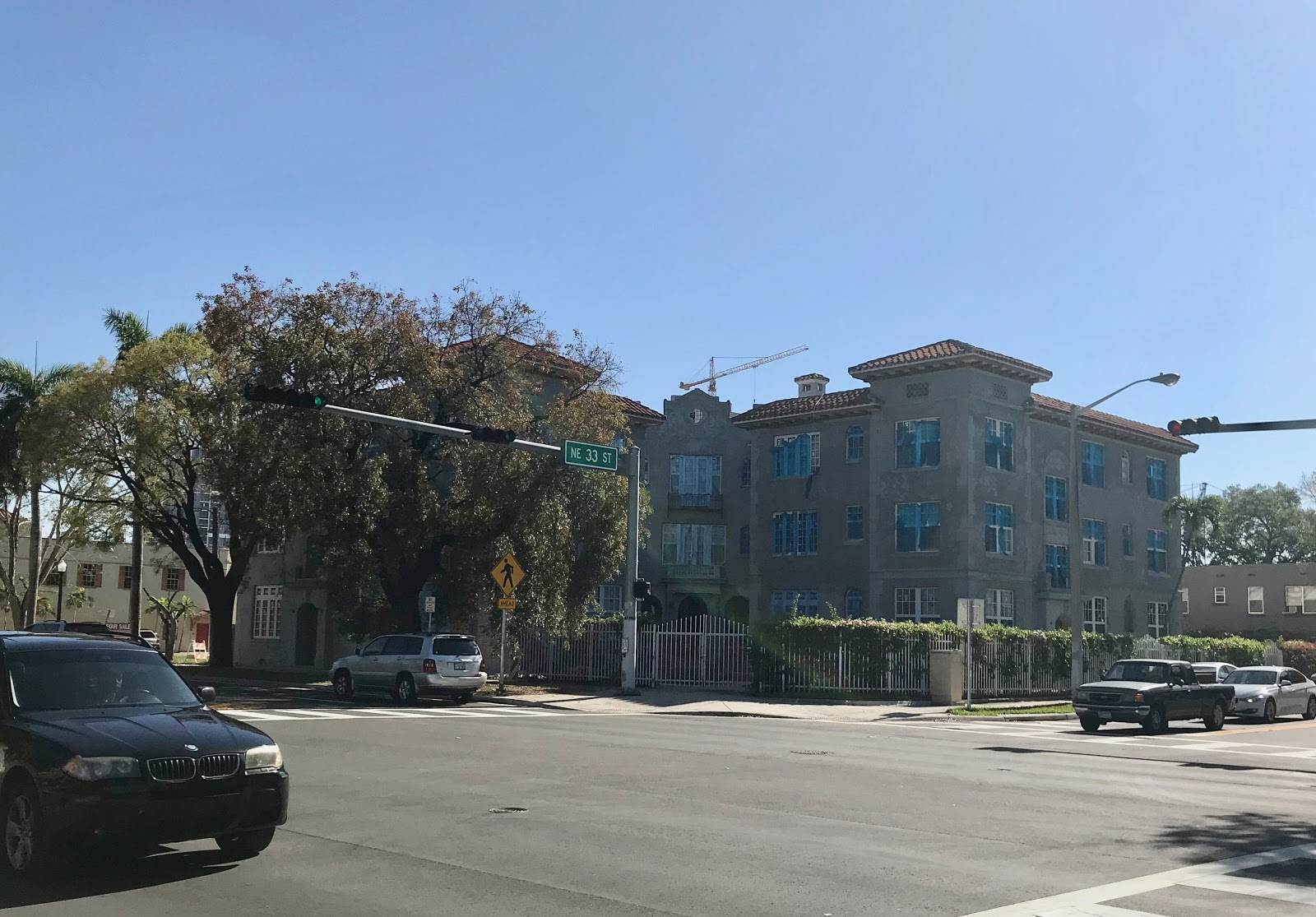 One of two identical historic buildings on the south west corner of Biscayne Boulevard and 30th Street (both are actually known as Beverly Terrace) this Mediterranean Revival apartment building is being now restored. 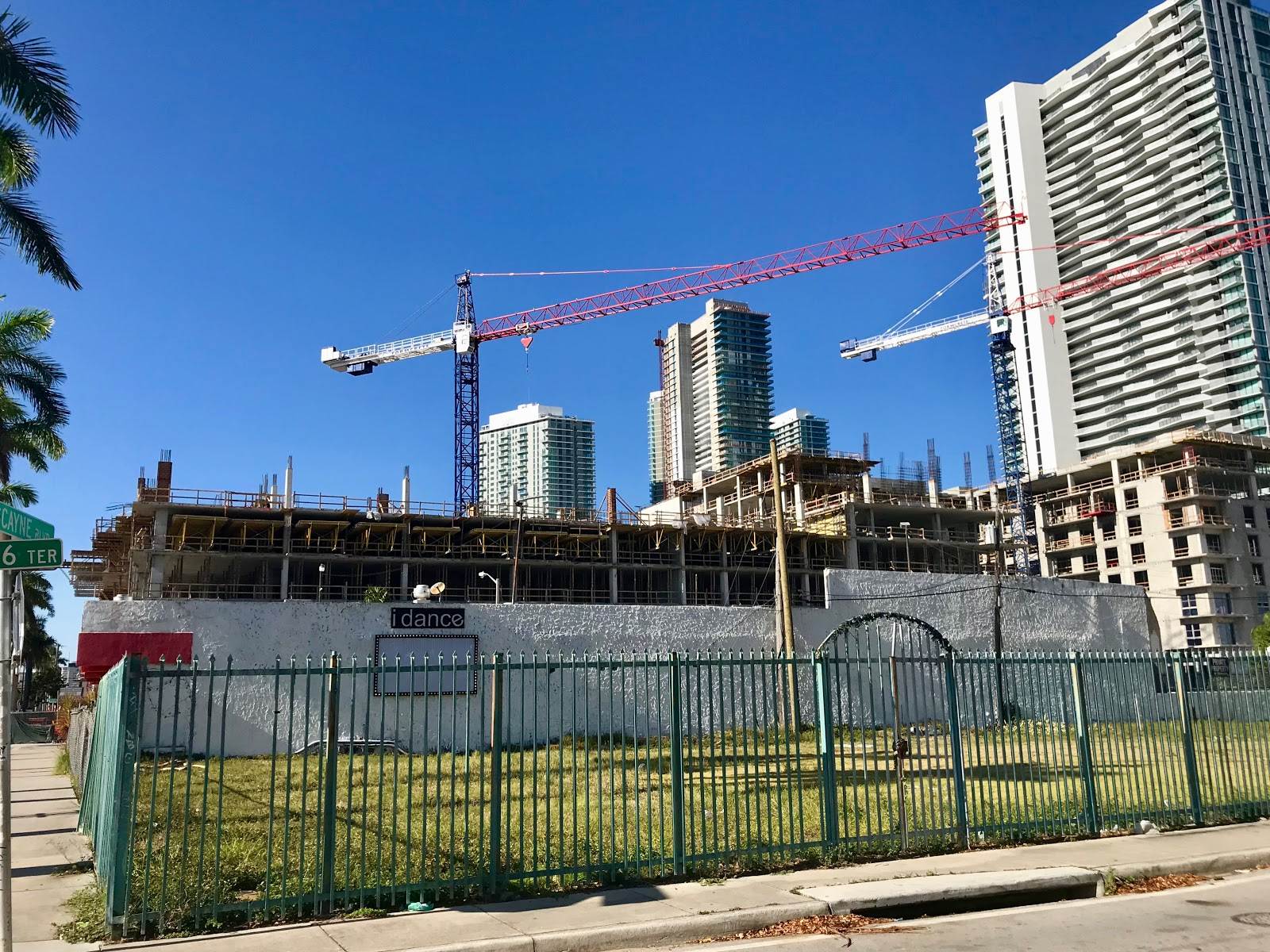 Biscayne 27 is a mid rise rental apartment community currently under construction in Edgewater. As the name makes pretty clear, it’s on 27th Street and Biscayne. According to the developer, it will have 12,000 square feet of amenity space, including a club room, a media room, and private offices. 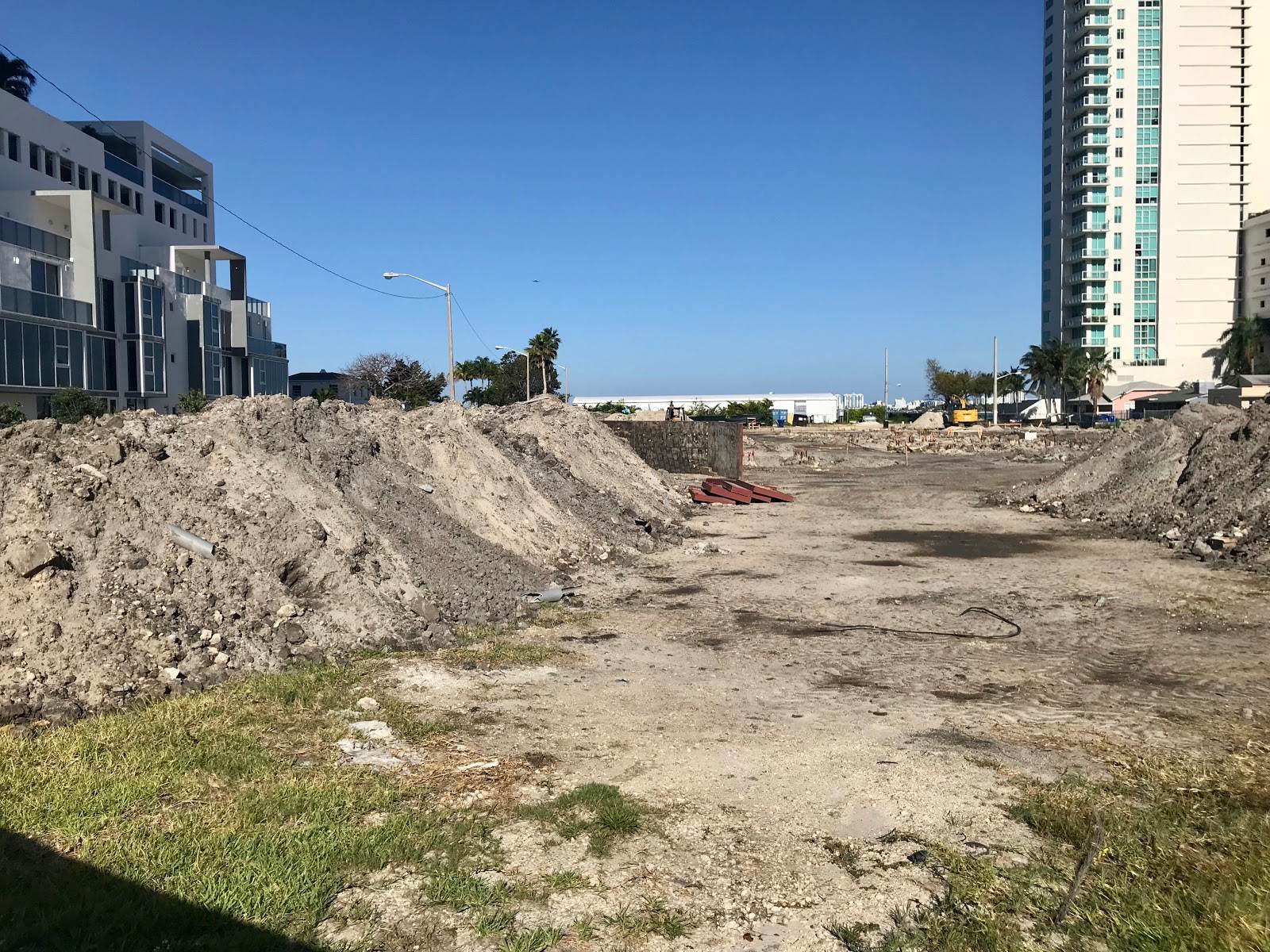 Land is still being cleared at the site of the luxury Missoni Baia project, directly on the bay. Although workers broke ground in October, according to Miami Today, it looks like they haven’t gotten too far since. Developers OKO Group LLC, OB Group, and Cain International predict that construction of the 249 unit tower is expected to be completed by fall 2020. 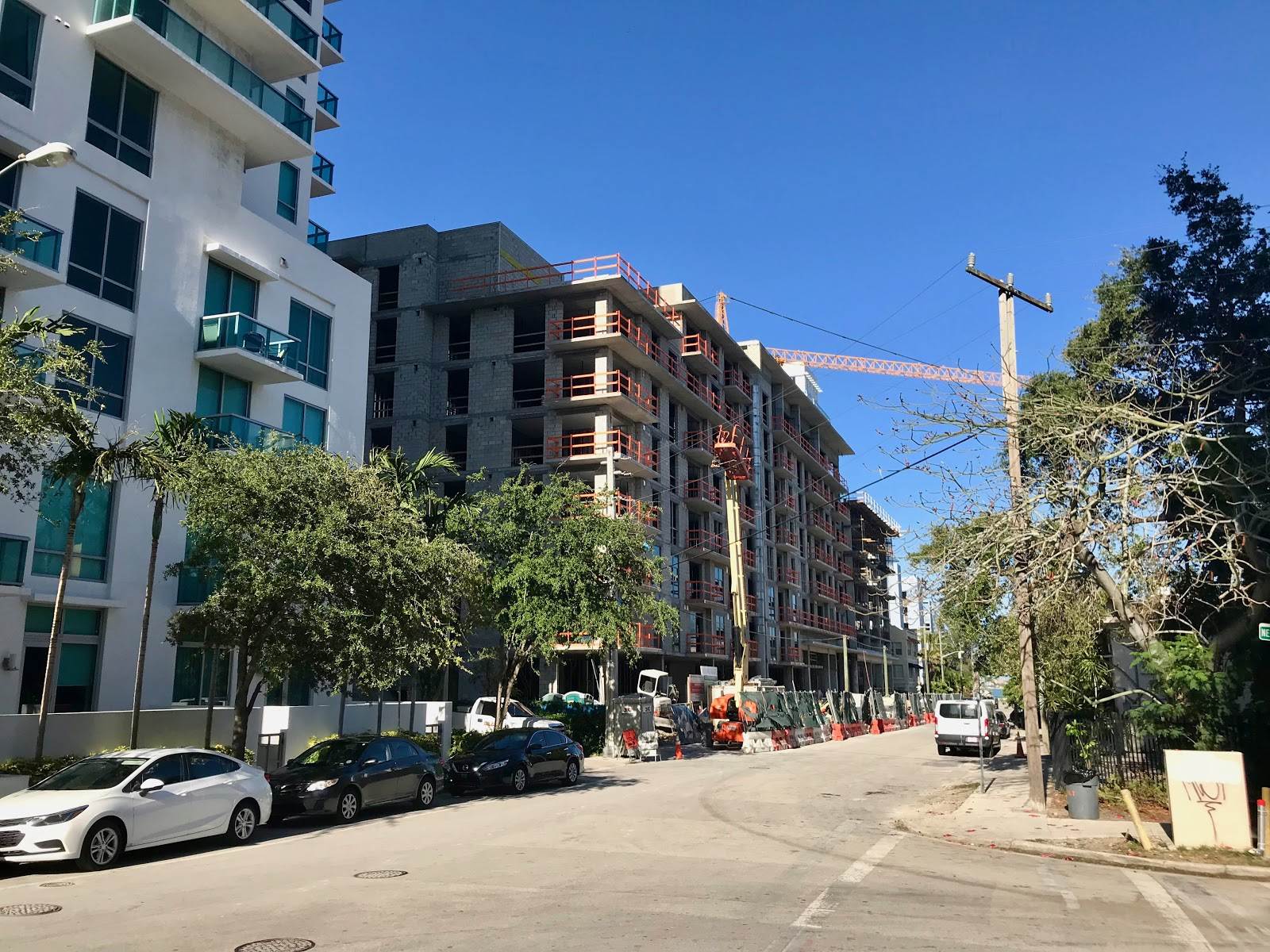 This Market rate rental building being developed by Mill Creek Residential is expected completion in December. Spanning from 24th to 25th Streets, the building includes 297 units spread across eight stories accompanied by a 417-vehicle garage. 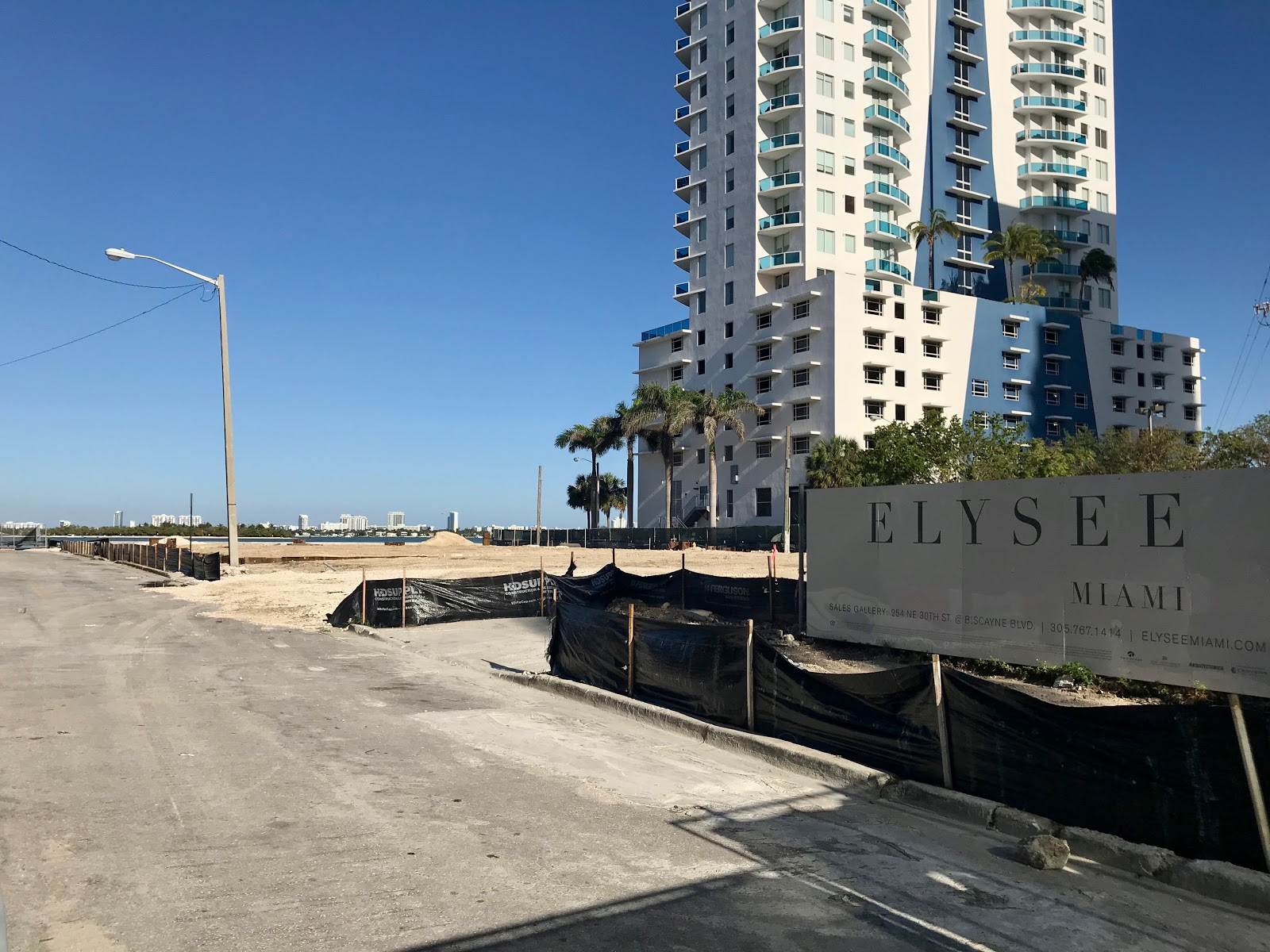 Land has been cleared for Elysee, French for the heaven of Ancient Greece, the Elysian Fields. Elysee could also, of course be a reference to that great Parisian boulevard, the Champs Elysee, and Biscayne Boulevard, Miami's much more modest version which is mere blocks away. The 57-story tower, however, has not yet broken ground. Half the 100 units are sold. The most expensive of the towers currently under construction in Edgewater. Prices start at $1.5 million.

The interiors are being done by french interior designer Jean-Louis Deniot, although credit for the most interesting aspect of the project should probably go to its architects, Arquitectonica. Elysee is basically wider at the top than it is at the bottom, with a telescoping design that responds to market forces in a really simple way. Basically, higher units cost more per square foot. Buyers want bigger units the higher they go, especially when it comes to penthouses. And penthouses are at the top of the building.

Aria on the Bay 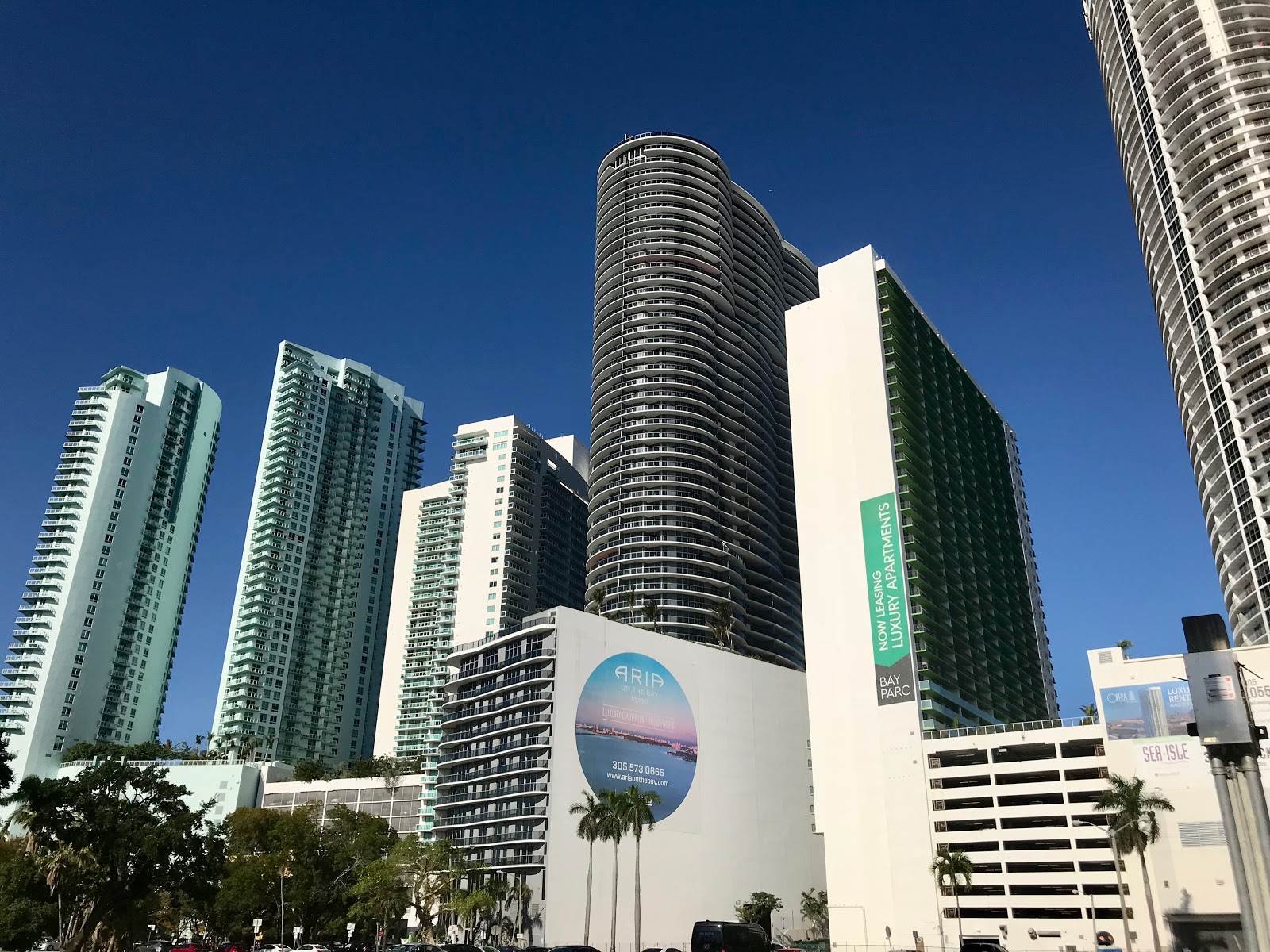 Aria on the bay is practically complete and will begin closings in the next month. In late March, Miami Today reported: “Nicolás Bárbara, the sales director for the condo at Cervera Real Estate, says 90% of the 648 units are sold, including four commercial spaces. Regular units range from 813 to 2,362 square feet. Developer Melo Group hopes to sell the remaining 70 units this year. Price tags dip as low as $400,000 for one bedrooms and rise to $1.8 million for three bedrooms.”