The Miami River meanders through the heart of Miami, diving the twin, skyscraper-strewn districts of Downtown and Brickell before it bends northwest and heads toward the airport. Planners intend the river to someday have a riverwalk, also known as the Miami River Greenway, running along both sides, much like the one that already exists along the New River in Fort Lauderdale. An idea that has been in the works for decades, the river walk will someday add life and vitality to the downtown core. But the river walk is a more complicated proposition than its sibling, the Miami bay walk. The river walk has more obstacles and, unlike with the bay walk, there is no one central section that is mostly complete to serve as a catalyst for the rest. 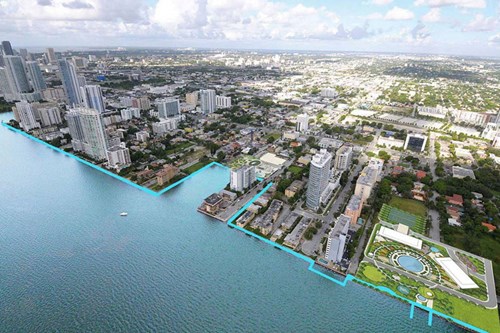 The closest it gets to a functioning river walk is the area where the river opens to the bay. There the river walk is wide and inviting, festooned with public art as it wraps around either side of the gap. On the south side of the river, it quickly ends at the Miami Circle National Historic Landmark, a popular park. On the north side it stops at the EPIC Hotel’s Marina, restarts as it runs along the EPIC Hotel itself, stops again at the Brickell Avenue bridge, and then runs along the old Knight Center, hidden from the street, and stops, again, at decrepit Fort Dallas Park.

Further up the river, there are increasingly intermittent but disjointed sections completed and open to the public, especially around Jose Marti Park and just west of the I-95 overpass, but overall, that’s about it. Around the Lummus Park area there is a section of river that has become very exciting, with restaurants and nightlife, including the popular ‘Wharf’ which is located in a large, temporary tent and will eventually be replaced by a development with an accompanying river walk. Although this may be the most vibrant part of the Miami River, there is practically no river walk here now to speak of.

With the walk itself in such unreliable shape, you can forget about a unifying design theme, like Fort Lauderdale’s river walk. The closest to that was a study carried out by Miami's Downtown Development Authority that proposed naming the combined Miami bay and river walks the ‘Miami Walk.’ 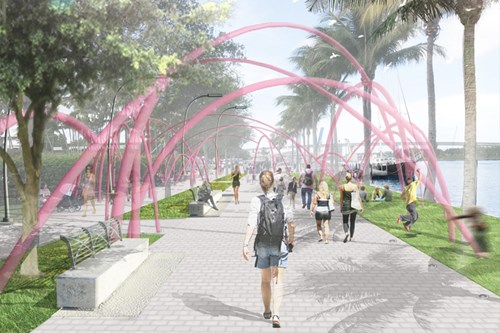 Built by developers as they put up neighboring buildings, as required by law, the various sections are wildly different looking, from the bare-bones stretches to those that are actually quite nice to walk along. Some sections are attractively lined with restaurants, bars, and cafes, have public art and fountains, and benches and greenery, while others are hidden behind fences, under bridges, or behind tall buildings, with inconsistent accessibility from neighboring areas.

There has been some good news for the Miami river walk lately, but not nearly enough. City of Miami voters just approved a project called Miami Riverside, which will be a mixed-use project with four towers. It replaces the old Miami Riverside Center, an office building for the City of Miami government on the north side of the river, immediately to the east of the I-95 overpass. The developer, Adler Group, intends to move forward as soon as the city decides where to move their offices, which Adler will be building as part of the deal. Designed by Nichols Brosch Wurst Wolfe & Associates, the megaproject will have residential, hotel, office, and commercial components. The development will include a riverwalk and will run for a block.

Other developments are also planned that will expand the river walk, eventually. The Related Group is holding onto two large parcels near the east end, at 444 Brickell Avenue, where an older mid-rise office building and the Capital Grille Restaurant now stand. They intend to build a three-towered luxury residential megaproject on the site when the real estate market picks up again. Just to the south of the Miami Riverside project, across the river another massive, billion dollar, four-towered project is in the planning stages by developer Chetrit. With the market as soft as it is now, who knows when that will eventually get built though. 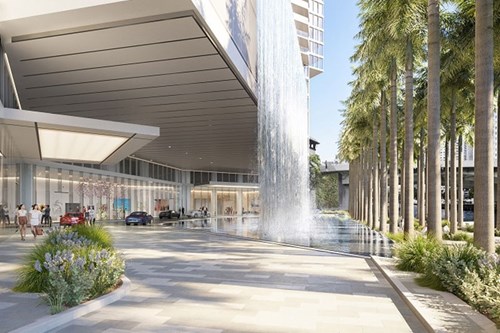 Kar Properties is selling units at One River Point, a super-luxury set of twin towers designed by the famous architect Rafael Vinoly and connected by a three-story sky bridge containing a private club. This will be located a block and a half east of Adler’s Miami Riverside, and its river walk will connect to a small section of the walk which is already built at the condo tower next door. The One River Point river walk will be lined by a massive waterfall which, when completed, could become a highlight of the entire river.

There are other projects of varying sizes either in the planning stages or being constructed in future river walk territory as far north as the Dolphin Expressway. Most recently, a fifty-room boutique hotel and food court constructed out of shipping containers, located at 5 to 27 Southwest River Drive and called The Shipyard was just announced. The river walk is slowly being built in bursts and lulls following Miami’s cyclical real estate market, but the future is taking forever to get here.