A Tugboat With Pinball Flippers: Have You Seen This Water Cleaning Machine Ambling Around the Bay?

The Scavenger 2000 looks like a small tugboat with arms, wings, or, heck, pinball machine flippers. It may not have the viral Facebook fame of Baltimore’s Mr. Trash Wheel, but the Scavenger 2000 is a more practical and effective vehicle. A Miami-based company called Water Management Technologies created the boat, which is designed to reduce water pollution as well as skim floating surface waste. They say it is the most effective pollution control and water management vehicle available in the world today. And the City of Miami itself has one. We don’t know how long it’s been in operation with the City of Miami, but we found this document mentioning the Scavenger 2000 as far back as 2003. It’s the kind of technology that, if deployed on a large scale, might even be able to help with Florida’s current algae crisis. 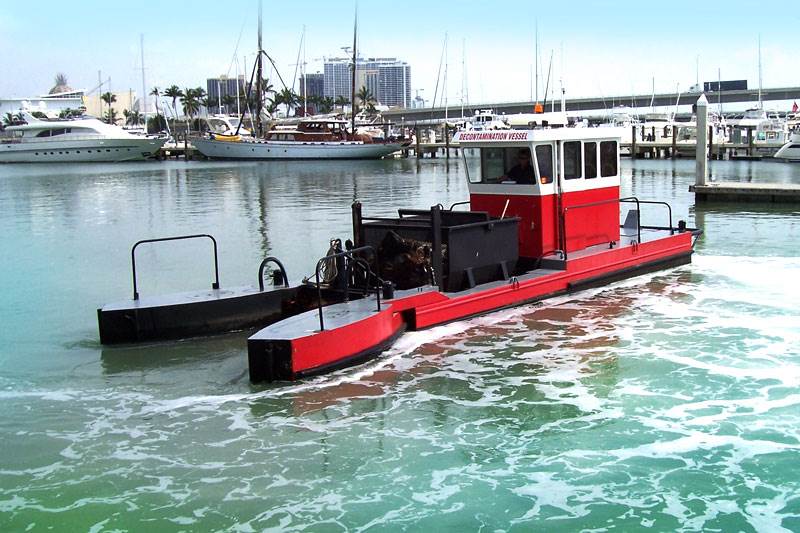 “The Scavenger2000™ Decontamination Vessels improve water quality by reducing and eliminating bacteria and viruses, raising D.O. (Dissolved Oxygen) levels, controlling algae growth, improving water clarity and eliminating nasty odors.” says Water Management Technologies. “A multi-purpose vessel, the Scavenger2000™ not only decontaminates and re-oxygenates water, its unique design also allows it to collect floating (Surface) waste and debris, creating a safer and more ATTRACTIVE [emphasis theirs] public waterway.” Water Management claims to eliminate 98% of bacteria and coliform in the water that passes through the system, and algae counts by half.

This is how it works: The water passes between two movable booms that collect surface garbage and then into the hull of the boat, where it is decontaminated in the decontamination chamber which is located under the trash bin and crew cabin. It shoots out of the back, past the propeller, where it is oxygenated. A deflector can send clean water downward. A powerful water cannon can be used to clean things like docks or used in emergency firefighting. 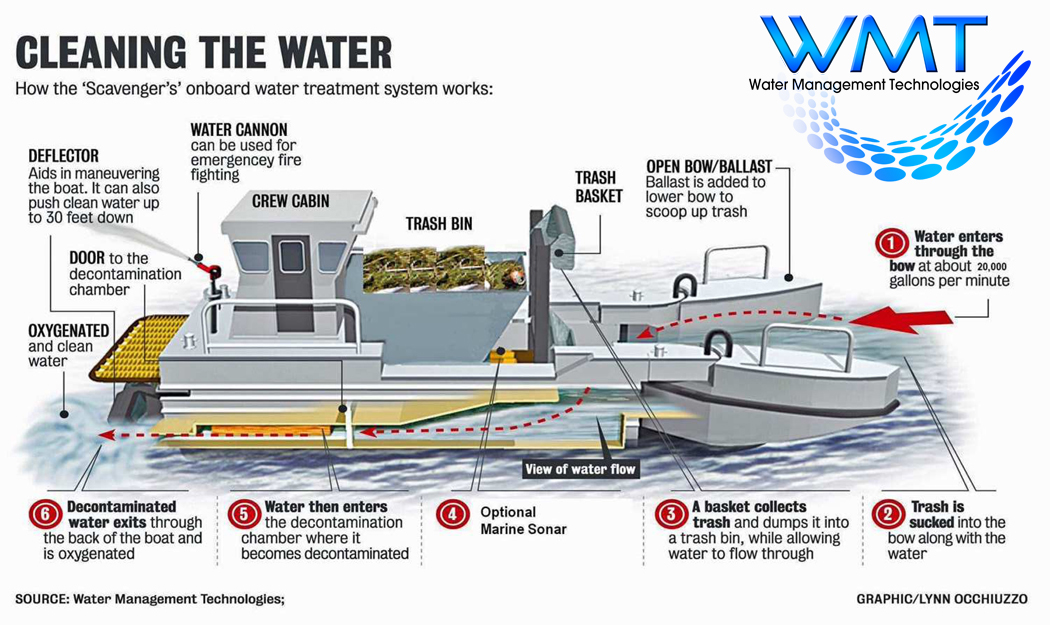 In Miami, the Scavenger 2000 cleans and oxygenates the water and collects debris in navigable bodies of water such as Biscayne Bay, Ademar Canal, Davis Canal, Dinner Key Marina, AAA, NE 21 and 28 Street Cove and the Miami River. According to the contract with the City of Miami, the boat actively cleans Miami’s waterways at least five hours a day, every day of the week. That’s basically full time.

We reached out to the company for comments on how their tech might be used to fight Florida’s mutual epidemics of green algae and red tide in our waterways and seas. When they respond, we’ll add it here.