The History of Brickell: Miami’s Manhattan

Bordered by the Miami River to the north, Biscayne Bay to east, the Rickenbacker Causeway to the South, and I-95 to the West, Brickell is one of Miami’s oldest neighborhoods. Constantly evolving, Brickell has changed radically over the years, including an incredible development boom in the last twenty years. A hub of the Latin American financial industry, and home to many of Miami’s foreign consulates, as well as thousands of condo-dwelling urbanites, Brickell is the densest neighborhood south of Manhattan.

Very little is known about Brickell’s earliest inhabitants, the Tequesta Indians, even though they lived in South Florida for over 2,000 years. The Miami Circle archeological site at the opening of the Miami River to Biscayne Bay, right on Brickell point is the earliest evidence of Tequesta settlement in Miami. A circle of post holes where a Tequesta hut once stood, the Miami Circle sat directly across the river from the Tequesta Indian burial mound in the heart of downtown Miami. That mound was destroyed with the construction of Flagler’s Royal Palm Hotel.

The Tequesta were long gone, however, by the time of the pioneers who came to settle in Miami from the north. These were homesteaders who established settlements scattered around South Florida.

One of the earliest homesteading families was the Brickells, from which Brickell gets its name. William and Mary Brickell and their children came to mouth of the Miami River in the 1871, where they established a home and trading post and purchased large swaths of land dense with natural foliage. Their trading post was set a just few yards back from the river on its south bank, near what is now fifth street and Brickell Avenue. The Brickells traded with the Miccosukee and Seminole Indians who traveled down the river from the Everglades. The Brickells had extensive real estate holdings that included all of present day Brickell and extended south to Coconut Grove.

The fortunes of the Brickells, along with everyone else in Miami, changed radically when construction of Henry Flagler’s railroad reached Miami on April 7th 1896, with the first train arriving on April 13th. Along with Julia Tuttle, who owned extensive land north of the Miami River, the Brickells had been involved with negotiations with Flagler to extend his railroad to Miami and, also along with Tuttle, agreed to give land to Flagler when he brought his railroad here.

At the turn of the century Mary Brickell took control of the family’s real estate holdings, and the family would become wealthy from developing their land. She was known to be tough but fair. It is said she never foreclosed on a mortgage. The Brickells laid out a subdivision between 1910 and 1919 with broad avenues and landscaped medians. By 1920 grand winter estates lined Brickell Avenue, and Biscayne Bay. This area would become known as Miami’s millionaire’s row or gold coast. The area became a mixture of wealthy northerners and locals. People like Louis Comfort Tiffany and William Jennings Bryan had winter homes there. Bryan’s home still stands, on a small section of Brickell Avenue that extends south of the Rickenbacker Causeway. It was restored by philanthropist Adrienne Arsht, who uses it as her guest house.

Only a few other Brickell Avenue mansions still exist. There is the Santa Maria mansion, part of which still stands on the grounds of the Santa Maria condominium on Brickell Avenue, and is used as the building’s clubhouse. The mansion which the Brickells themselves built on Biscayne Bay in 1910 only survived until 1958.

In addition to developing property themselves, the Brickells sold substantial tracts of land to others, including developer, Locke T. Highleyman, who developed the equally exclusive Point View subdivision in Brickell. This is where the section of Brickell Bay Drive that curves along the bay is today. They also sold the land to James Dearing on which he would build his incredible home, Villa Vizcaya, which is now Vizcaya Museum & Gardens.

As time went on, a surge in growth in the 1950s and ‘60s, resulted in land the winter estates occupied being developed for high density residential and commercial uses. In the 1970s Miami became an important international financial hub, and Brickell became Miami’s financial district - the financial center of Miami and in many respects the financial center of the Caribbean and Latin America.

‘Millionaire’s row’ was developed into a row of condo towers in the 1980s, including the iconic Atlantis, which is known around the world for the square hole through its center. Designed by the internationally renowned, Miami-based architecture firm, Arquitectonica, Atlantis was made famous by the intro sequence to Miami Vice. Designed in Arquitectonica’s early days, Atlantis’s fame helped establish the firm as a major architectural force.

The development of Brickell Key, originally a spoil island that appeared when Henry Flagler dredged the Miami River to deepen it, began in the 1970s. It was developed by Swire, a Hong Kong company, which turned Brickell Key into a luxury enclave with high rise condominium towers, office buildings, and a hotel, all surrounded by a bay walk encircling the island. 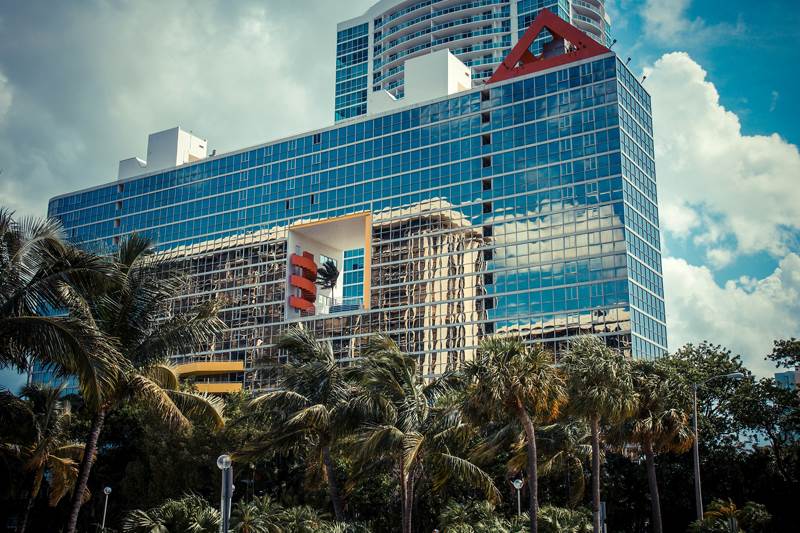 At the end of the 20th century, and through the first decades of the twenty first, to the present day, Brickell has continued booming, with rapid development. A public walkway along the river and extending down the bay is gradually being built. Massive condominium towers, rental apartment buildings, office buildings, and hotels have sprouted up. A three-tower megaproject called Icon Brickell was built at the opening of the river to the bay, adjacent to the Miami Circle, by Related Group, South Florida’s biggest developer, which has built many other projects in the neighborhood. Swire, which developed Brickell Key, built a multi-block megaproject in the heart of the neighborhood called Brickell City Centre. Buildings are getting taller and taller, and development is moving west, toward I-95 as development sites closer to Biscayne Bay become scarce. 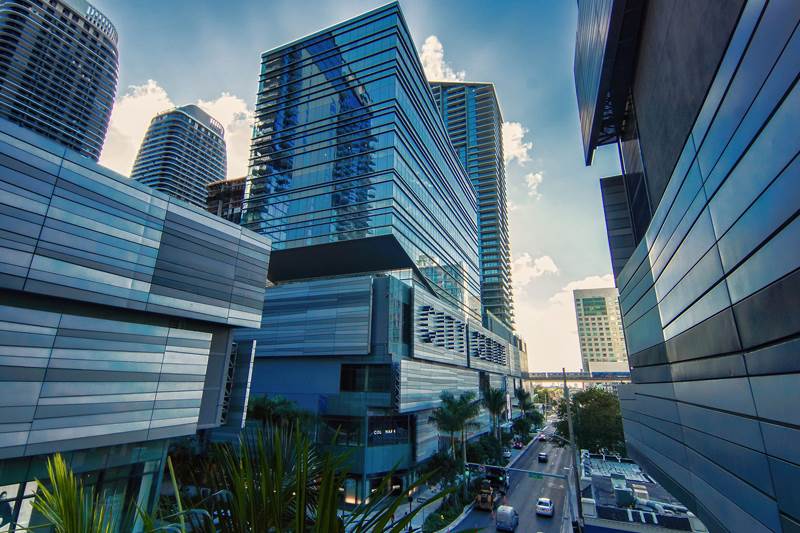 City Center in Brickell. Photo by: Aglez the city guy